Bloems' Burmester leads after the opening round at Sun City 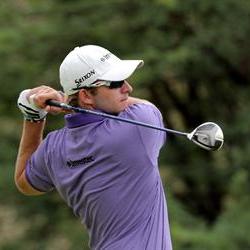 Bloemfontein’s Dean Burmester has charged into the lead on after the opening round of the Nedbank Affinity Cup being played at Sun City.

The Schoeman Park professional carded an opening round of seven under par 65 to lead the field by one shot.

The player told OFM Sport this morning that he is delighted with his opening round, which started on with a par at the opening hole on the 10th.

“At the turn things sort of went quite for me, but I stayed patient and I managed to bring in two birdies on 7 and 8,” Burmester said about his round.

The 25-year-old played with Warren Abery and Michiel Bothma, who have 11 Sunshine Tour wins between them and he believes it help playing alongside the seasoned campaigners.

“It really helps, just sort of rubbing off on the guys and learning mannerisms and little things like attitude towards bad shots.”

“Over the last five years being on the tour I’ve learnt a lot from all the guys. Fortunately I know Warren and Michiel very well and it was great fun out there.”

“They were very supportive and that also help. Obviously there is a bit of pressure, every tournament you tee it up there is pressure, but playing with senior guys takes it off,” Burmester said about playing with Abery and Bothma.

He added that patience will be the key to his second round in the Pilanesberg today.

“Patience…it’s really tough to go out after a good round and shoot another really low score, if you do…great, but the key is just not to get frustrated and stay patient out there. There are a lot of birdies on this course, so keep the mistakes off the card and take the chances where they are,” he said about today’s second round.

We have 22 guests and no members online